Need assistance in finding the right product / solution? We can help.

How are you thinking of using a CBD product?

It’s thought that CBD may affect health by attaching to receptors in the body’s endocannabinoid system — a complex biological system involved in maintaining certain aspects of a person’s health. Emerging research shows that endocannabinoids may play a role in regulating such functions as memory, sleep, and mood, as well as metabolic processes such as energy balance.

Which is Better – Full Spectrum, Broad Spectrum or Isolate?

There is much debate on which form is better, however a 2015 study leans in favor of full spectrum CBD oil products. There are many that believe that other cannabinoids, THC especially, are necessary to take full advantage of what cannabis has to offer. Ultimately, however, we are all different and it comes down to each user and their particular needs. If drug testing is a concern, you’re encouraged to seek out CBD isolate products or broad spectrum products instead of full spectrum. 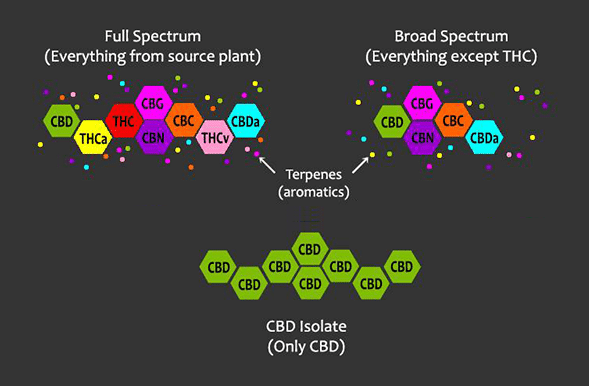 As you’ve seen, CBD comes in many forms – from creams and salves to capsules, gums and mints to vape oils and tinctures. Each form may come is various strengths AND may be processed (or refined) to contain different level of ingredients. These processing levels are generally referred to as Full Spectrum, Broad Spectrum and Isolates which are covered in more depth at the following page.