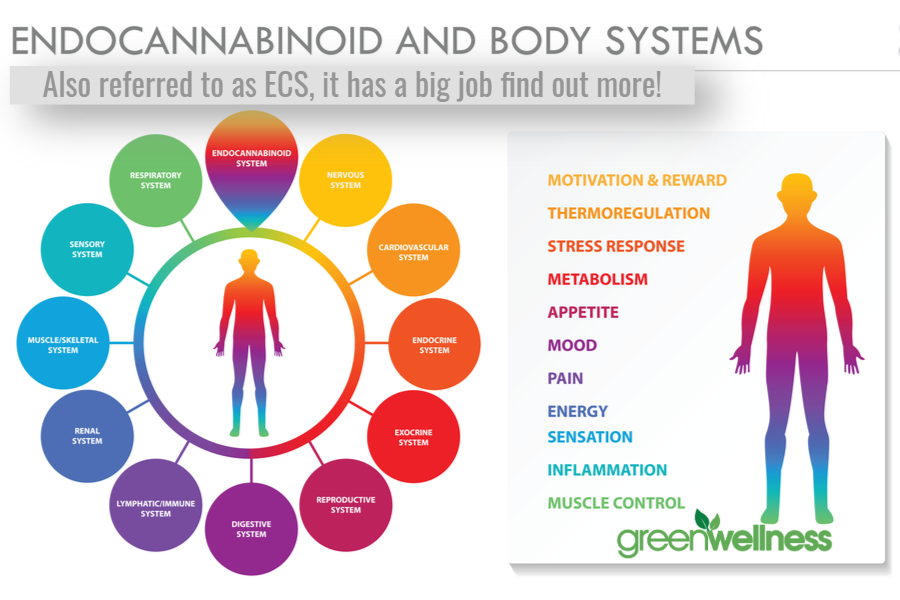 Here at Green Wellness, we talk about all things hemp, and the endocannabinoid system has been part of that, but our primary focus has always been CBD. CBD (Cannabidiol) is one of the non-psychoactive cannabinoids, or compounds, found in cannabis – both hemp and marijuana. It’s the second most prevalent compound (behind THC) in cannabis and is quickly on its way to becoming the most well-studied. In order to really understand it, though, we need to take a step back to how these compounds work in our body – in something called the endocannabinoid system.

The Endocannabinoid System or “ECS,” is a biological system possessed by all mammals that regulates a range of functions in our bodies, including:

This system exists and is active in your body even if you don’t use cannabis. It’s goal is to promote homeostasis (balance) at every level of biological life. The ECS is made up of cannabinoids, or compounds, and receptors for them to act upon. The function of cannabinoids in your body (regardless of whether they are naturally produced by your body or from a plant – which we will talk more about later) is to act as receptors for cells. These receptors act as conduits for messages from the brain to the cells. They are the “bridge” that enables your body to operate as it should.

Homeostasis is the ability of the body or a cell to seek and maintain a condition of balance as it deals with external changes. We know that the world we are in is always throwing changes at us, and our body is always working to stay in balance and perform, using the endocannabinoid system as that primary tool. For example, if an outside force, such as pain from an injury, throws off that homeostasis, your ECS will kick in to get you back in balance.

How Does the Endocannabinoid System Work?

It feels appropriate to add an “oh my” to that phrase. It’s not quite so complicated as the vocabulary words make it seem. The cannabinoids, or compounds that work in your body’s ECS to keep it balanced can come from one of two places. We’ve written a whole blog about it, but here’s the quick version:

The ECS is composed of two primary endocannabinoid receptors:

Scientists and researchers have determined that these two primary endocannabinoid receptors in the body, known as CB1 and CB2. Others do of course exist, they are just less researched and less understood. This is still pretty young science. Cannabinoids can bind to either receptor in an effort to get those cells back to homeostasis. The results of that effect depend on where the receptor is located. As an example, cannabinoids could target CB2 receptors in your immune cells to signal and try to reduce inflammation, a common indicator of autoimmune disorders.

What Bodily Systems are Impacted by the ECS?

Dr Sanjay Gupta, an American Neuro-Surgeon and CNN’s chief medical correspondent changed his stance on the provision of cannabis while investigating its powerful therapeutic properties and witnessing CBD successfully treat Americans for his documentaries, Weed and Weed 2. He shocked mainstream America saying “We have been terribly and systematically misled for nearly 70 years in the United States, and I apologize for my role in that.” Through Dr. Gupta’s review of the history of the cannabis he found that it has been a legitimate medicine for at least 3000 years. That makes alot of sense when we realize that our body is creating the very compounds that make plant based cannabinoids so effective. We have naturally occurring cannabinoid receptors all over our body that interact with CBD. They take in the CBD and use it to neutralize any processes that are misaligned. These receptors exist because our body is already making its own cannabinoids. The receptors and cannabinoids make up our Endocannabinoid system. Our Endocannabinoid system is always in action and is a major factor in keeping our bodies in a balanced, neutral state. Neutral is different in our heads, hands, digestive systems, etc, which is why people may include CBD in the vitamin regimen to support different needs.

As such, that impact can be to our full systems.

THC and the Endocannabinoid System

Besides THC and CBD, there are now more than 100 known cannabinoids in hemp and marijuana plants. THC interacts with the ECS by binding to receptors, just like the endocannabinoids that our bodies produce. That allows it to have a range of effects on your body and mind, depending on which receptors it’s binding to. There are some definite benefits that have been found with THC – like pain reduction and appetite stimulation. But there can be negative effects from that interaction as well, such as paranoia or anxiety. If you’re not sure if the product that you’re taking contains THC, take a look at the lab test results. Any quality product will make them accessible to you.

CBD and the Endocannabinoid System

Unlike THC, CBD is not intoxicating. It does not bind to receptors in the same straightforward manner that THC does, but instead serves as a protectant for other cannabinoids. It also affects the CB1 and CB2 signaling, which is why CBD can actually diminish the effect of THC. Additionally, CBD inhibits an enzyme, FAAH, from breaking down anandamide, which is a fatty acid transmitter that will keep more endocannabinoids intact in the body. It’s a complex process and we are definitely learning more every day.

Think of your body like a small town with bunches of telephone lines or electric lines spreading out across the area. Those electric poles & wires are like your neurons and help to spread information or “power.” What the cannabinoids do in this system are to act like a lineman (someone who works on power lines and phone lines), cleaning up and maintaining the system. While they aren’t needed for the lines to operate, they make sure that it works smoothly.

When there is a deficiency of cannabinoids in the body, the system is essentially lacking what it needs to operate smoothly. There are simply too few linemen. And what happens to all of the electric wires? They don’t function as they should. In the same way, when your neurons lack enough cannabinoids, it can cause problems.

According to Dr. Ethan Russo, who conducted a study on the relationship between cannabinoid levels in the body and ailments, “migraine, fibromyalgia, IBS and related conditions display common clinical, biochemical and pathophysiological patterns that suggest an underlying clinical endocannabinoid deficiency that may be suitably treated with cannabinoid medicines.” Not just Russo’s study found this link. Another study, conducted around ten years after Russo’s, found that “underlying endocannabinoid deficiencies indeed play a role in migraine, fibromyalgia, irritable bowel syndrome and a growing list of other medical conditions. Clinical experience is bearing this out.”

How Does it Happen?

Due to the lack of research on the topic, it is difficult to say. One explanation is that the body doesn’t produce enough cannabinoids on its own to supply its own needs. Normally it does, but, for whatever reason, some people may find that they do not have enough ECBD to satisfy their bodies’ needs. Since it is not stored in the body, but rather made upon demand when it is needed in the neurons, additional cannabinoids are needed from a different source when there is a shortage.

As this research is fairly new (the receptors of the endocannabinoids system were only definitively proven to exist in the human body at the end of the 1980s), there are a lot of questions about the conclusions that some research has drawn. While there is a correlation between various physical ailments and a shortage of endocannabinoids in the body, there have only been a few studies to look at this relationship.

As it currently stands, the research in no way claims that these problems can be cured with CBD or other plant based phytocannabinoids. Logically, it seems that CBD should help, but this is not concrete. We’re excited to see this new science progress with growing awareness about CBD and other phytocannabinoids. As always, there is plenty more room for additional research, and we at Green Wellness will try to keep you informed.

Want to learn more? check out our CBD Buyer’s Guide page or sign up for our newsletters!