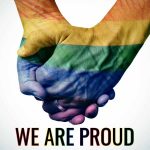 By Quinton Charles and Cara Oorbeck

We are a CBD company, so why in the world are we writing a blog on this, you may wonder? I, Cara, have been working at Green Wellness Life for two years now, but before GWL, I spent some time (15 years to be exact) in full time vocational ministry. During seminary and ministry I was continuously learning about loving people. I found that as I walked along side people, my perspectives changed drastically. I became less judgmental! I worked hard to become someone who listened and cared about others; everybody has a unique story and when I committed myself to really hearing and seeing all humans, I am usually surprised and often inspired. Even though I have not been a pastor for 15 years, this is a practice I continue to work on. I have found I learn so much from others who are different than me!

Like many people living in 2020, including my co-workers at GWL, my heart is heavy and I am so saddened by the dissension today. As we wrestle with the anger and unrest in our country, we at GWL believe it is becoming increasingly important to honor our history. It is an incredible privilege, as a human being, to connect with and journey alongside one another with a spirit of acceptance and love. Because almost all of us know of or love someone who is gay, bisexual or trans gendered, it is essential to be an organization, as well as individuals, who are committed to caring about all walks of life, despite personal beliefs. So in an attempt to show solidarity and to truly embrace people where they are, we wanted to honor our history and human kinds journey! We believe it is important!

Pride is a celebration of LGBT history, identity, and progress that has been held since 1970. Starting in the United States, Pride quickly spread to become an international celebration honoring LGBT persons and their work for recognition. Since 2009, June has been National LGBT History Month in the United States. But why June? On the 28th of June, 1969, riots occurred along Christopher street in New York City, outside the now-famous Stonewall Inn.

Before the riots can be understood, some context is needed. Why did the riots occur in the first place? What started them?

For years preceding 1969, gays, lesbians, transgender persons, and anyone who did not conform to gender norms were harassed by police, arrested for their sexuality or clothing. For example, it was common for police to entrap gay men in bars and parks by attempting to buy them a drink or flirting with them; once the gay victim responded, the police officer would proceed to arrest them for sexual solicitation.

Gay patrons were also refused service in most bars due to a unique law in New York which denied liquor licenses to any “disorderly” venues. LGBT patrons would be deemed “disorderly” per se, with the consequence being that bars would refuse them service.

These laws (and others, requiring men to wear masculine clothing and women to wear feminine clothing, or be charged with disorderly conduct) severely limited the amount of places that LGBT persons could go, socialize, and be open about their sexuality. So where did they go?

Most establishments open to LGBT patrons existed on the fringe of legality. With most of the bars open to them being owned by the mafia (yes, you read that correctly), LGBT patrons were overcharged, threatened, and had to frequent places that were not maintained properly. However, these bars offered a space where LGBT customers could be themselves and not fear police violence or arrest.

The Stonewall Inn was one of these bars. Owned by the mafia (who payed off the police to avoid more frequent raids), the Stonewall was one of the only bars that offered music and dancing to its clientele. Frequented by the more “obviously” gay , it was a place where those who had very little (or, sometimes, nothing) to lose went. Many of them had lost their families due to being rejected, some were homeless due to being kicked out, and most were rejected even by the “respectable” gays (those who managed to blend into the heterosexual world).

It was at this bar that things would change irrevocably. On the night of June 28, 1969, a police raid occurred. Police arrived at 1:20 a.m. without any indication that they were coming. Typically, the police (who were paid off by the mafia) would announce their raids; they would arrive, check the ID’s of patrons, make sure no one was wearing the opposite gender’s clothing, and leave, allowing the bar to operate for the rest of the night.

The police stormed into the bar and proceeded to ask for identification from each of the patrons (around 200 that night). This is where things changed. Patrons refused to give their ID’s to the police, and those who were wearing clothing that did not match their sex refused to be arrested (as was customary). At this point, the police decided to arrest everyone in the bar and to take them to the station.

By now, a sizable crowd had gathered outside of the bar on Christopher street. Estimates put the number of people outside of the bar at around 1,500-2,000 people by the time the first police trucks arrived to begin taking away Stonewall patrons.

This is when things became violent.

A few of the bar patrons were resisting arrest, and the crowd was becoming more rowdy. As police tried to contain the crowd, they shoved some people to the ground. At this point, the group of people that had gathered started to throw coins, cans, bricks, and attempted to flip a few of the police vehicles. Police, worrying about their safety, drove off (with some slashed tires). The remaining officers took those whom they had arrested back into the Stonewall and barricaded themselves inside.

The police actions, aimed at the most vulnerable of the LGBT community, enraged the crowd (comprised of homeless gay youths, transgendered persons, and gays from several minorities), that soon had pulled up a parking meter and was using it to break down the barricaded door. They also lit a garbage can on fire and threw it through a window of the bar. Their home, where they could be out and accepted, had been taken from them by police. Pushed to this extreme, they fought back.

At this point in the night, riot control officers arrived at the site of the Stonewall Inn. The riot control officers (known as TPF, for “Tactical Patrol Force”) attempted to clear the streets by marching slowly and pushing the crowd back. The mob openly mocked the police. The crowd cheered, started impromptu kick lines, and sang. Lucian Truscott, a reporter from the area, reported in The Village Voice: “A stagnant situation there brought on some gay tomfoolery in the form of a chorus line facing the line of helmeted and club-carrying cops. Just as the line got into a full kick routine, the TPF advanced again and cleared the crowd of screaming gay power[-]ites down Christopher to Seventh Avenue.”

By 4:00 a.m. most of the violent confrontation had concluded. For several more nights, protesters and locals pushed back the police, flipped cars, graffitied messages like “Support Gay Power,” and “They Invaded Our Rights,” and stopped cars in the streets, refusing to let them pass unless they admitted support for the LGBT cause.

This rioting and violence against police (including many fires) continued for 6 days. One year later (and every year since), celebrations have occurred in June, with most on or around June 28 to commemorate the liberation of LGBT persons and the beginning of their active and open struggle for equal recognition. While there had been a movement for equality before, the riots marked the beginning of an era in which LGBT persons would not accept poor treatment.

Just like the LGBT community, people who support full legalization of hemp have faced enormous hurdles in their path to equal recognition under the law. For example, some of the earliest agitation for the legalization of hemp was by the LGBT community in the 1980s. They sought to legalize cannabis as a therapy for the ongoing HIV/AIDS pandemic. And it isn’t just one way. Hemp-related businesses and industries have been some of the most supportive businesses of the LGBT community. Maybe it is because they understand how it feels to be overlooked and treated as immoral. No matter the reason, LGBT individuals and the hemp industry have always stood together.

Now more than ever is a time to talk about inequality in our society, to celebrate the wins, and fight for those who still are without a voice. To honor the rich history and social justice we have a GIVEAWAY! You can win a pair of Bombas pride socks and a bottle of WYLD gummies as a colorful CBD daily supplement by simply following us on social media and commenting #GWLpride. We are happy to give away these socks as every item purchased from Bombas is an item donated at a homeless shelter. Bombas has donated over 30 million clothing items to more than 3,000 Giving Partners across the country. There are many ways to show pride, but these rainbow socks and colorful gummies are a reminder to live life colorfully and boldly, and speak your truth! The winner will be announced Monday, June 8th, 2020, so don’t miss out on this opportunity!